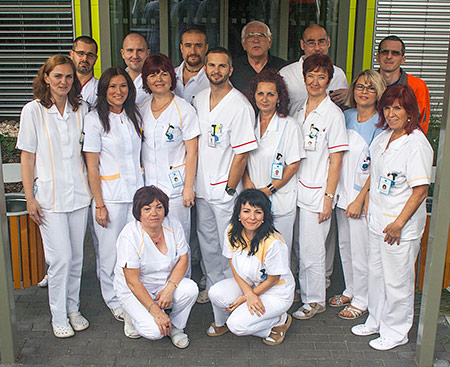 The Nuclear Medicine Department in the Faculty Hospital in Nitra commenced its operation in 1986 with the RIA Laboratory, followed by simple examinations on available devices.

In October 1, 2004 the department became independent from the Faculty Hospital and started operating as IZOTOPCENTRUM, s.r.o. – Nuclear Medicine Centrum. We provide services for around 1 million inhabitants, i.e. the entire Nitra Self-Governing Region and adjacent counties. Some examination methods are only carried out by us in Slovakia, while in others we belong among the 3 or 4 departments able to perform them. The range of examinations is wide and essentially includes all the available examinations in the field, namely oncology diagnostics, cardiology, pneumology, nephrology and special treatment methods. Nevertheless, our participation in navigated surgeries is also quite essential as well.

In order to follow trends in the field it was necessary to upgrade equipment that was already morally obsolete and firstly expand the department’s scope with new examination trends with the use of positron emission tomography (PET/CT), which allows significant improvement and increased accuracy of early diagnostics as well as the monitoring of treatment success, in particular with oncological diseases. The first innovation was performed in 2006, when we started to work with the then new Siemens devices: the Biograph Duo PET/CT scanner and E. Cam SPECT scanner. The new innovation was carried out along with the move to the premises on Rázusova Street in 2014, where the “original” equipment was complemented with the latest generation of devices, again by Siemens: the PET/CT Biograph 40 and SPECT/CT Symbia Intevo.

In 2016 we replaced the PET/CT Biograph Duo with an entirely new PET/CT Biograph Horizon device from Siemens. At the time of installation it was the fifth such device in the world.. 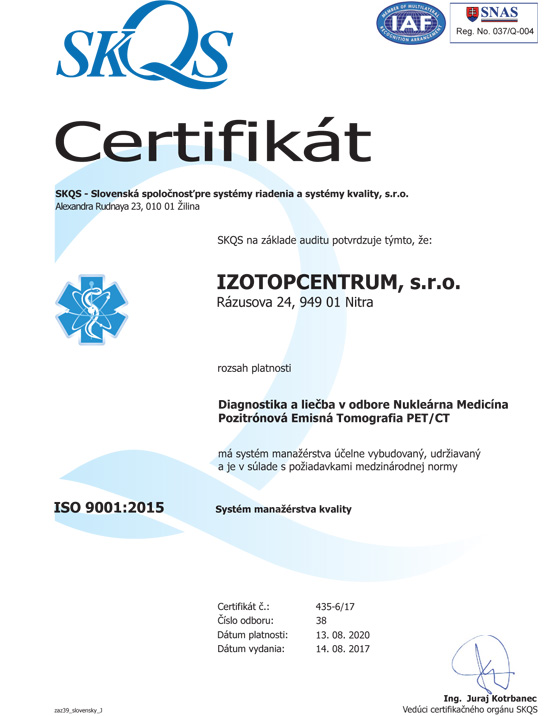 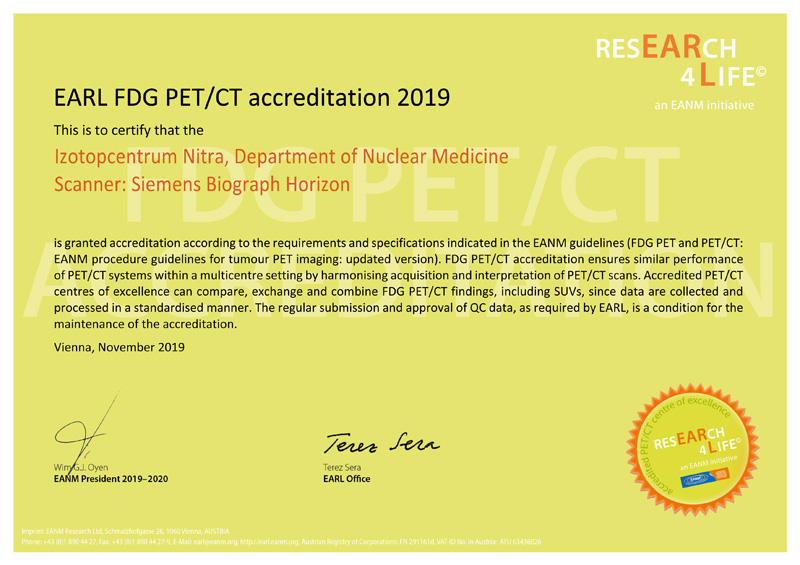 We have a well-established and maintained quality management system in compliance with the model and requirements of the ISO 9001:2008 international standard.

January - We started treating patients with prostate cancer and neuroendocrine tumors using radionuclide therapy. No one else is doing this treatment in Slovakia, but also in the Czech Republic.
Mrs. MUDr. Joined the team and strengthened the advice of radiologists. Ivana Holincová.
2020
July / August - we installed a new SPECT camera from Siemens Evo Excel, which replaced the SPECT camera E.Cam.
We completed the superstructure of our department and opened a new clean space for the preparation of radiopharmaceuticals, a new therapeutic part of the department and new social spaces.
2019
Our team significantly strengthened the arrival of the head of Mr. MUDr. Jozef Kubinyi, Ph.D., FEBNM
2018
December – we are the first in Slovakia (and neighbouring countries) to perform the newest PET/CT examinations in the world with 68Ga-PSMA targeting prostatic carcinoma and 68Ga-DOTA peptides used for neuroendocrine tumours.
August - new colleagues/physicians joined our team: Dr. Cristina Paschetta and MUDr. Tomáš Pintér.
2016
July, August – installation of the new Biograph Horizon PET/CT scanner by Siemens, replacing the Biograph Duo.
January – introduction of 18F-choline examinations in Slovakia. The examination is used for diagnostics related to prostatic carcinoma, hepatocellular carcinoma, etc.
2015
July – final building approval and commencement of relocation while maintaining full operation of the department
June, July – new set of equipment: the PET/CT Biograph 40mCT, SPECT/CT Symbia Intevo 6, installation and relocation of the “original” equipment to the new premises on Rázusova 24, Nitra
2014
October – more than 500 PET/CT examinations inside the new premises, as well as skeletons, lungs, kidneys, hearts…We are becoming accustomed and so are our patients
November – start of reconstructing the premises on Rázusova 24
2013
October – 10,000 PET/CT
Autumn – MUDr. Andrej Vondrák: attestation in nuclear medicine
2012
December – appointment of MUDr. Andrej Vondrák as Head Physician
August – ISO 9001:2008 certificate
2008
We organize the 44th Nitra Nuclear Medicine Days with international participation, after a Slovak-Czech event once again after several years.
2007
March to May – workplace reconstruction
June – initiation of work with new-generation devices by SIEMENS: the E.Cam and Biograph PET/CT
2006
October 1 – establishment of IZOTOPCENTRUM, s.r.o. as a non-governmental healthcare organization
2004
May – initiation of work with a perioperative probe in the navigated operations of sentinel nodes
2003
A new applied activity meter: the Currimentor II
May – digitization of MB 9200 gamma camera with the option of whole-body examination.
1998
MUDr. Soňa Kurucová successfully completes attestation in nuclear medicine.
December – commencement of relocating the department from POS in Chrenová to the oncology department in the hospital area.
November – celebration of the 10th anniversary of the department’s establishment, together with the very first all-Slovak nuclear medicine seminar with international participation, herewith founded.
1996
March – RIAMAT semi-automatic RIA evaluation device that greatly improved the possibilities of in vitro diagnostics.
1995
February – new DS 7 gamma camera for area coverage, made in France, also allowing SPECT examinations
1994
September 1 – closure of the department due to economic reasons. Operation continues after their resolution by donations.
1992
Amiga 2000 evaluation device to gamma camera
1990
May – MUDr. Vladimír Vondrák wins the selection procedure for the position of Head Physician (previously Deputy Head Physician)
1989
October 12 to 14 – we organize the 26th Nuclear Medicine Days, a nationwide event with the participation of 350 nuclear medical professionals from all over the Czechoslovak Socialist Republic. The event is among the most successful in history to this day.
Christmas – MB 9200 gamma camera made in Hungary. Its operation is launched in February 1989.
1988
Christmas – Gama 8100 gammagraph made in Hungary, whose operation began following its installation in 1988.
1987
November 20th – NMD official opening ceremony
September – first results from the RIA laboratory, first examinations on a single-probe set: thyroid gland accumulations and on a double-probe set – radio-renography and accumulation fibrinogen tests.
1986
May – August – initiation of the department’s trial operation
May – arrival of donated devices from Slovak and Czech institutions
April – commencement of reconstructing the former POS to Nuclear Medicine Department, led by MUDr. Vladimír Vondrák, authorized to establish the NMD
Mens sana in corpore sano A healthy mind in a healthy body.